Sometimes it doesn’t take much for me to jump on my soapbox. Last week, after I read Ann Brenoff‘s column Dear Hollywood, I May Be Invisible To You, But I’m Very Real on the Huffington Post I got in quite a lather (see what I did there, soapbox, lather?) with another reminder of the ‘culture of invisibility’ in Hollywood. You know the thing, that misguided idea that deems any woman over 40 as unviable, unwanted, unfuckable, unbankable onscreen. All lathered up, I pondered, again, the source of the idiotic invisibility. Since I have a PhD and wrote a dissertation that examined the culture of invisibility in romance fiction, I’m going to share my theory with you. 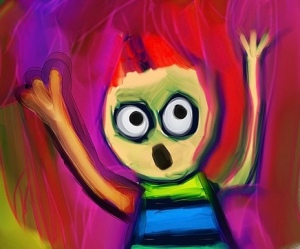 Remember when you were 5 years-old, and your mother explained the penis and peegina* sex thing that time you were precocious and asked at the dinner table one night? Remember when, a short while after learning the revolting details of where babies came from, you realized that all the kissing you saw on TV, and in movies, was another incomprehensibly revolting thing that grown-ups like your parents did, and you thought every time your parents kissed they were trying to make a baby and you couldn’t fathom WHY your mother would let your father put his penis in her peegina?

Do you also remember how incredibly disgusted you were, but how your confused little kid mind tried to make sense of how you didn’t get pregnant when Raymond Michaud kissed you that time you played in the treehouse the big kids built in the woods near your house?

Remember when you were 17 or 19, or 22 and kissing and sex was like perpetual springtime and a raging thunderstorm of emotion and passion and excitement? Remember when you joined the club you never thought you’d join? You wondered how you ever thought sex wasn’t something you would want to DO and be DONE TO, and you finally, FINALLY got why everyone on TV, in books and movies wanted to do it. Everyone had sex, all the time—except your parents.

Or your unmarried, forty-something aunt.

You thought this because never saw parents or grandparents or spinster aunts on TV, in books or movies doing it or even interested in doing it. They were too mature, tool old, too busy with work and retirem 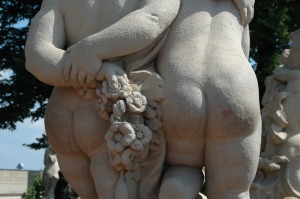 ent, and went to bed early after their 4:30 dinnertime. And movies, books, and TV didn’t lie. The message was subtle, but you noticed, unconsciously, that people only ever had sex when they were young. You never saw people over 40, like your grandparents, kissing or groping, grinding, or dry humping on TV, in books or movies, and because you never saw it the idea of people over 40 kissing—or humping—was as incomprehensibly revolting as your mother letting your father put his penis in her peegina. The only reason your parents and grandparents still kissed was because they were Italian, Italians are affectionate, and that sort display of affection was allowed on TV, in movies and books. Your parents and grandparents weren’t really passionate because passion was for the young. The perpetual springtime raging thunderstorm of emotion and passion and excitement was for the young you saw on TV, in movies, in books, in romance fiction.

The images of youth are everywhere in the media, on TV, in books, movies, advertising, and this is the insidious way the Ick Factor is enacted. You are indoctrinated without knowing. You are misled to believe sex and passion is only for the young since that is all you see. This perpetual lack of truth is the way stereotypes of age and sex are maintained. The erasure of a huge portion of the population from view has led to the notion that sex is something only human beings under 40 want and enjoy. But it’s worse. If you’re a woman, you notice there’s a double standard when it comes men and women and sex. As you get a little older, maybe when you hit 30, you realize there’s an additional aspect to the Ick Factor you didn’t notice before, when you were younger. Men over 40 continue to get it on in books, movies and on TV.

Even more sinister is way the Ick Factor works, the continual lack of truth is the way stereotypes of woman and age are maintained, the way women over 40 are cast in stereotyped roles (Hey, grandma!) or dismissed, excluded from appearing on TV, in movies and books. This is truly incomprehensibly revolting, and this is how we are conditioned to think. We erase women over 40 from being when we know this is NOT how women over 40 are.

In a world of reality television, isn’t it time to change the Ick Factor to a Truth Factor? Isn’t it time we show life as it really is, show people of all ages as whole, passionate, sexual human beings in love? Isn’t it time we grow up from being grossed out little five year olds who can’t comprehend how mommy would let daddy put his penis into her peegina?

I battle the Ick Factor. I write books that challenge the ‘younger’ norm of romance fiction. My lead characters are all over 40; the romance heroines are older than the standard twenty-something romance heroine.  The women I write are whole, intelligent, vibrant, sexual hum

an beings, not stereotypes of age. I write outside the norm because I believe it is beyond time to change. Discussing the Ick Factor and the ‘culture of invisibility’ is excellent, important, but what good is all the talk about age discrimination and sexism if no one challenges the ‘usual?” For decades, Romance fiction has been at the forefront of adapting to social and cultural change for women. What better place to shift the attitudes about women age, sexuality, make women of a certain age visible, and kill the Ick Factor?

Trust me on this. I’m a doctor who writes romance fiction.